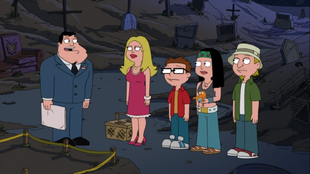 Plot Heavy
The family turns their backyard into a cemetery. 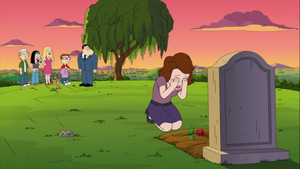 When the family sets out to have a picnic at their premium cemetery plots, they find that other graves have been placed there, and Stan admits he sold them to buy jet skis with the intention of buying them back later. When the family insists he make things right, he discovers that there are only two spaces left in a very undesirable area of the cemetery. Annoyed with the family getting on his case, Stan cedes the decision-making to everyone else. Faced with somehow trying to raise money to buy new plots, Roger, rising out of a grave that one of his personas is buried in, proposes the family start their own cemetery, noting that it was big business for the current operation. When Stan questions where they will actually put a cemetery, Francine proposes the backyard, noting that no one uses it. When the idea hits a snag for lack of customers, they decide that they need a celebrity endorsement in the form of a purchased plot to generate business. With Scottie Pippen in town for a book signing, they set their sights on him, although Klaus is not thrilled with the idea. He shares his thoughts with Stan, who concedes that it's not their worst idea. This confuses Stan, who is torn between Klaus' idea of a swanky poolside party club and theirs, although he decides to side with Klaus. 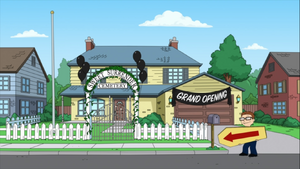 At the book signing, Hayley makes their pitch and Scottie agrees to hear them out. Admitting that his book sales are down, he proposes faking his own death so they can bury him, and both parties can call it a win-win. Viewing the commercial the family films, Klaus and Stan still work through their idea, although Klaus tosses aside Stan's ideas for his own. Meanwhile, the family begins to find some success, but quickly find themselves up to their eyeballs in corpses. Roger proposes tossing all of them into the pool and sealing it with concrete, which interferes with Klaus' health inspection tour, whom they quickly kick aside and take their anger out on Stan for trying to make them to fail because of the inspection. Still confused, Stan looks to Klaus, who fires back at both the family and Stan, insisting that his idea will proceed. 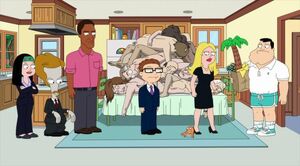 Facing not only the decaying bodies, as well as the health inspection, Roger urges the family to rush the burials, which causes Francine to reconsider their opposition to Stan. She proposes a partnership to get past the inspection, using the bodies as club patrons with movement faked by the rest of the family. The ruse succeeds, but Stan still feels a lack of confidence. Francine confronts him over his lack of support for their idea, and he admits that their success caused him to doubt himself and his usefulness, but he never tried to sabotage them. They, in turn, admit they need him to blame when things go wrong and want him to take charge again. The first order of business is to ditch the cemetery and club, but the family also demands an answer on how to get rid of the accumulated bodies. Working with Scottie Pippen, the latter takes them out to sea behind Stan's jet ski as Stan and the family look forward to being buried in their own backyard.