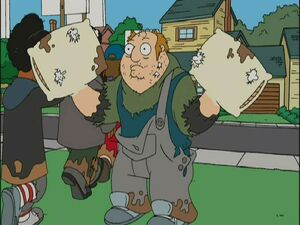 Pillow Hands McGraw is one of the homeless men Hayley shelters in "Threat Levels".

When Hayley unionizes the homeless so they won't fight in Stan's "bum fights", Steve arranges for Stan to fight Ted Feedler, a giant bum described as so bad that he "killed his own name". Stan reacts in horror and wants to know why they couldn't get an easier bum to fight like Pillow Hands McGraw. Pillow Hands McGraw responds that he isn't a "scab", a worker that crosses a picket line.

Retrieved from "https://americandad.fandom.com/wiki/Pillow_Hands_McGraw?oldid=51118"
Community content is available under CC-BY-SA unless otherwise noted.