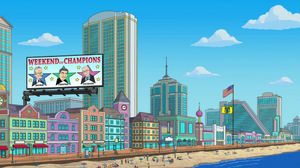 Philip Douglas "Phil" Jackson (born September 17, 1945) is an American retired professional basketball coach and former player. He was the head coach of the Chicago Bulls from 1989 until 1998, during which Chicago won six NBA titles. His next team, the Los Angeles Lakers, won five NBA titles from 2000 until 2010.

Retrieved from "https://americandad.fandom.com/wiki/Phil_Jackson?oldid=52224"
Community content is available under CC-BY-SA unless otherwise noted.