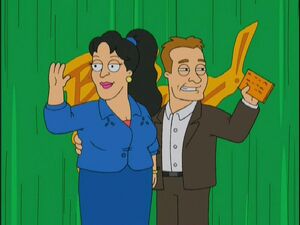 Peter Scolari is an American television, film and stage actor best known for his roles in the television shows Bosom Buddies alongside Tom Hanks and Wendie Jo Sperber, Newhart, and Honey, I Shrunk the Kids: The TV Show.

Peter Scolari appears with Wendie Jo Sperber as themselves as hosts of the show Best Buddiez! in "Roger 'n' Me".

Retrieved from "https://americandad.fandom.com/wiki/Peter_Scolari?oldid=51923"
Community content is available under CC-BY-SA unless otherwise noted.