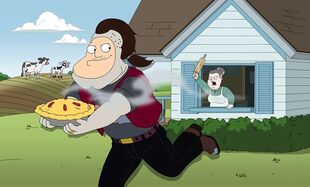 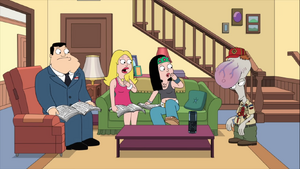 Roger's full day of personas irritates Stan when he is late to a happy hour evening, but the latter is slightly distracted by a bump on Roger's head. Later at the mall after missing his theme song appearance, Stan complains that his personas are simply a way of goofing off, but also makes note of the bump on his head getting bigger. When Roger finally collapses, he is told he needs complete rest. Following assurances that they would be willing to do anything to help him, he requests Stan to take over his day of personas while he relaxes at a hot spring to recuperate. Despite his attempt to stress the importance of following his character list, Stan regards of them all as pointless and blows off the job halfway through the day. This sets off a chain of events that leaves the entire city in chaos the next morning when he awakens. 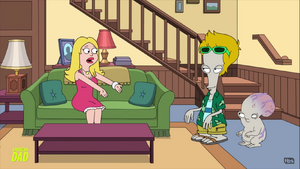 Stan sets out to make things right with advice from Klaus, as Roger returns home with his tumor turned into a homunculus name Rogu. As he reveals that he set Stan up to prove that his personas actually matter, he is shocked to discover that Stan went out dressed as Ricky Spanish. As Ricky, Stan goes completely power mad and takes over the entire town, forcing Roger to bring out the only persona powerful enough to meet him toe-to-toe... wedding planner Jeannie Gold, who also is Ricky's sister. As they clash, Roger is still almost defeated by Stan until Rogu, also dressed as Ricky Spanish, slices Stan's throat. However, this is just the inner lining of the alien camouflage suit, which Roger quickly peels off of Stan, returning his personality to normal. During another happy hour, Roger pledges to spend more time with Stan, and in order to facilitate that, his species had developed homunculi like Rogu as stand-in doubles, as Rogu is shown quarterbacking a football team.

Meanwhile, Steve finds that he is encouraged by other students to do drugs in order to improve his scat singing in the swing choir. He fails to find a sympathetic ear with Principal Lewis, who is determined to win the state finals, and loads Steve full of drugs on the way. Steve presents a wild, finals-winning finish that only ends when Lewis shares a syringe of morphine with him.