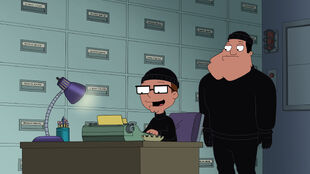 Permanent Record Wrecker
Stan has trouble gaining employment outside of the CIA. 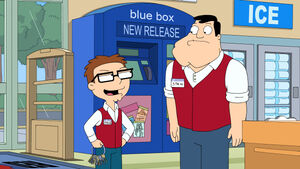 Stan gets upset with Steve while he comes home tired after a day of work at the Red State Grocery and gets onto him for slacking off on his chores at home. At work, many CIA agents are being released to save money and Stan finds himself out of a job. But when Stan applies to other jobs, he finds his record has been wiped due to his classified knowledge. Worried about what to do, Stan takes an entry-level job at Steve's store just as Steve gets promoted to assistant manager, leaving Stan jealous. The power goes to Steve's head since Stan was riding his ass, but Stan decides to get even by working Steve harder at home and sabotaging him at work, costing him his manager job. But when Stan finds out it will affect Steve's permanent record, he suddenly realizes he has screwed him over worse than he intended.

As Steve fumes at home, Stan comes home and admits his wrongdoing. They sneak into CIA Headquarters to clear Steve's record. Finding the file, Steve not only adjusts the record but embellishes it until they are caught. Avery Bullock returns the record and has no consideration for Steve's life, but Stan's mildly retarded replacement brings in bricks of active C4 explosive and only Steve and Stan are able to save the day, getting their jobs back. 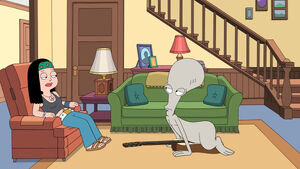 Meanwhile, Roger challenges a coffee shop musician to a performance duel with the loser agreeing to not return to the shop. However, Roger discovers that learning to play guitar won't be as easy as he thought and orders DVDs from an infomercial. Roger gets the DVD, he finds things are not easy with the DVD either. But when he smashes his television, the host Lorenzo comes to life and reveals himself as the devil and makes Roger a deal to win his wager. At the duel, Roger outshines his rival, but cons him into taking his place in Hell by offering to let him keep playing.

Retrieved from "https://americandad.fandom.com/wiki/Permanent_Record_Wrecker?oldid=79245"
Community content is available under CC-BY-SA unless otherwise noted.