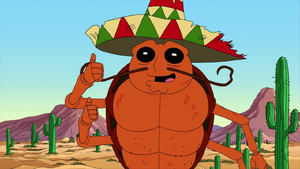 Pedro is originally a cockroach tied to a toilet paper tube with a rat's skeleton arms and legs that Steve fashions to bring up Stan's spirits and make him eat while in captivity in Mexico in "Toy Whorey". The plan works as Stan starts to eat again and their kidnappers, seeing them actually enjoying themselves in their imagination with Pedro appearing as a giant cockroach join in and are trapped in the cell while Steve and Stan escape. As Stan and Steve drive off in the kidnapper's car, Steve tosses Pedro out the window where he appears at first threatening to kill them before giving Security Officer Peña's regular goodbye from the ending of American Dad!.

Pedro is voiced by Jonathan Fener.

Retrieved from "https://americandad.fandom.com/wiki/Pedro?oldid=52103"
Community content is available under CC-BY-SA unless otherwise noted.