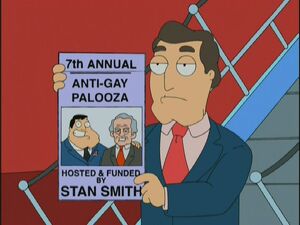 Marion Gordon "Pat" Robertson is the founder of numerous organizations and corporations, including the American Center for Law and Justice (ACLJ), the Christian Broadcasting Network (CBN), the Christian Coalition, Flying Hospital, International Family Entertainment Inc., Operation Blessing International Relief and Development Corporation, and Regent University. He is the host of The 700 Club, a Christian TV program airing on channels throughout the United States and on CBN affiliates worldwide.

Stan attracts the attention of the Log Cabin Republicans with his portrayal of Abraham Lincoln and his bodyguard in "Lincoln Lover". After at first rejecting and then embracing the gay Republican lifestyle, Stan is kicked out of the group when it is revealed he helped organize the "7th Annual Anti-Gay Palooza" with Pat Robertson. Stan is given the chance to replace the Langley Falls chapter of the Conservative Republicans first choice Nancy Calliope as speaker at the Republican National Convention when it is discovered she drives a Toyota Prius. Stan takes the opportunity to speak out on the behalf of the Log Cabin Republicans at the convention.