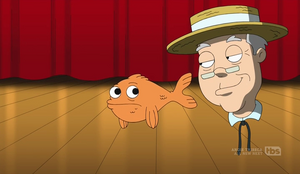 Parker Fennelly (October 22, 1891 — January 22, 1988) was an American actor who appeared in ten films, numerous television episodes and hundreds of radio programs. Fennelly made numerous appearances on live television shows of the early 1950s, including Lux Video Theatre, The Philco Television Playhouse and Studio One.

In later years he became a familiar face as the Pepperidge Farm's television spokesman between 1956 and 1985, delivering the slogan "Pepperidge Farm remembers" in his New England accent.

When some of Roger's acid falls into Klaus' bowl in "Camp Campawanda", he starts to hallucinate a giant goldfish cracker from a bag coming to life. As the hallucination turns into a complete auditorium of Pepperidge Farm products, the disembodied head of Parker Fennelly appears and tells Klaus that he's tripping.

Retrieved from "https://americandad.fandom.com/wiki/Parker_Fennelly?oldid=72732"
Community content is available under CC-BY-SA unless otherwise noted.