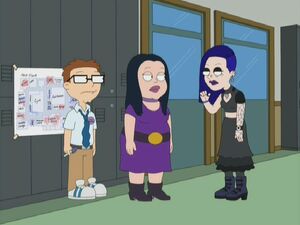 Pandora is one of Debbie's goth friends at Pearl Bailey High School. In "Escape from Pearl Bailey", she informs Debbie of the smear campaign against her that is placed on the school computers when she runs for student council president. When the guys are captured in the goth stairwell, she wants to perform "The ritual of the rusty dagger" with a dagger that she bought on eBay.

Pandora is seen at the "Pig Party" for ugly girls in "Stan's Night Out".

She has a crowd scene cameo at the Chimdale Mountain Inn in "100 A.D.".

She is seen outside of Cirque du Soleil Moon Frye in "Stanny-Boy and Frantastic" and on the school bus in "You Debt Your Life".

She is seen leaving Miss Laine's class in "Steve and Snot's Test-Tubular Adventure" and is at the party Steve and his friends throw for the uncool kids in "The Unincludeds".

She gets a significant character makeover when she is seen at the goth kids table in the school cafeteria in "The Witches of Langley" and make several appearances throughout "The Talented Mr. Dingleberry".

She is seen on campus at Groff Community College in "Pride Before the Fail".

Retrieved from "https://americandad.fandom.com/wiki/Pandora?oldid=84632"
Community content is available under CC-BY-SA unless otherwise noted.