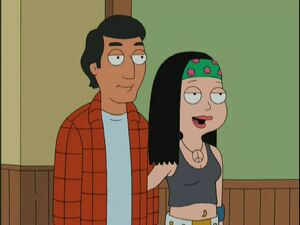 Paco is an illegal Mexican immigrant that Stan first abuses, then takes advantage of in "American Dream Factory".

When Stan finds a Hispanic man sneaking near his house after a bad day at work, Stan assumes he is a burglar and beats him senseless before Hayley explains that he's the neighbor's dog-walker Paco, an "unregistered visitor" looking for the lost animal. Stan decides to hire some help to make Father's Day teddy bears. However, when his potential employee starts to demand $7 an hour minimum wage pay and benefits, Stan realizes he can't afford it. Hayley begins to date Paco, and when Stan discovers Paco is excellent at sewing, Stan hires him for less money. His Father's Day bears are done on time, and are such a hit that Stan gets a huge Fourth of July order to fill. As a result he hires Paco's entire family, paying them in low wages and watered-down soda. Paco slacks on his work to go on dates with Hayley, and Stan convinces him to break up with her. Hayley is in such a rage that she calls the INS and gives them a tip about the factory Stan is running. They investigate, and while they don't find the immigrants they do find evidence that leads them to watch the house constantly. Realizing that they can't work in the house, Stan and Steve attempt to smuggle them to a warehouse where they can finish the bear order. However, the INS catches them, and Stan lies that the Mexicans are part of Steve's band when Roger steals Steve's band and asks to allow them to perform with Steve at the Langley 4th of July Festival. The INS leader agrees, but says that the agents will be in the audience, and will have to be deported immediately after. At the festival, Steve and the Mexicans sing John Denver's song "Take Me Home, Country Roads" - the only one they know in English about America they used to sing while dreaming of immigrating. Hearing it, Stan realizes that they love America so much he can't allow them to be deported; Hayley also realizes that she was hypocritical to defend illegal immigration but also use the INS for petty revenge. After the song, the two throw all the Fourth of July bears as free gifts into the audience, which causes such a mob to get them that the INS agents are temporarily unable to act as the family is smuggled away.

Paco is voiced by Efren Ramirez.

He has a crowd scene cameo in "100 A.D." where he was killed in a bus crash along with all others on board. He returns in the episode recap in "Son of Stan".

Despite being killed in the bus crash, Paco's character design is seen working to build Roger's restaurant in "Stan's Food Restaurant".

Paco is in Roger's Patagonia cooking class in "Eight Fires" and can be seen throwing an ax when Stan enters the Langley State Fair in "Lumberjerk".