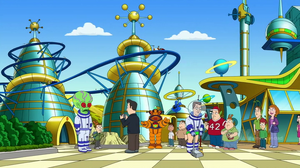 Outer Space Land is a section of the Familyland Theme Park. Although originally intending to go laugh at the vision of a retro-future presented in the park while on a family vacation in "Familyland", Roger is quickly won over when he sees the section of the park closely resembles his home.

When Roy Family turns the park into a death trap after he sees that families no longer meet his approval, Roger becomes king of Outer Space Land. Francine stumbles across Roy, causing him to announce a battle between the kingdoms in which he intends to free the winning team, although he tells Francine that he intends to renege on the promise and kill the survivors anyways. Francine uses the scent of her cinnamon cookies to cause the family to remember their home life and band together to confront Roy, who rewards their family spirit with lifetime passes to the park.

Retrieved from "https://americandad.fandom.com/wiki/Outer_Space_Land?oldid=48271"
Community content is available under CC-BY-SA unless otherwise noted.