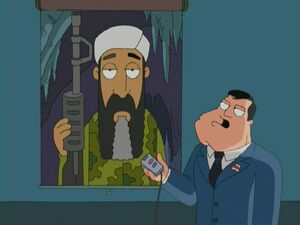 Osama bin Muhammad bin 'Awad bin Laden, widely known as Osama bin Laden (1957-2011), was a Saudi Arabian militant Islamic extremist. He is thought to be the leading figure in the instigation and planning of the September 11, 2001 attacks, and was a prime target of the "War Against Terror".

On May 1, 2011, the U.S. had confirmed that bin Laden is dead. DNA, witnesses, and the physical body has confirmed this.

In the Pilot episode, Stan shows Jackson and Marcus his pencil topper of Osama bin Laden with the pencil stuck up his 'pooper'. Later in the episode, Stan hears a crash downstairs and initially believes it to be Osama breaking in.

Osama appears in Stan's presentation to the senate on the evils of television in "A Smith In The Hand".

Roger determines that Osama bin Laden works at MacMillan and Sachs Investments in "Bush Comes to Dinner" and lives at 17 Lake Drive. However, when Roger and Steve arrive to apprehend Osama for reward money to buy Dollywood, it becomes obvious that Roger was wrong. However, the episode shows an epilogue of Osama using the name 'Bill' at MacMillen and Sachs had recently sold his house...apparently to Danny, a med student at Georgetown.

When Roger falls from the catwalk in "Phantom of the Telethon", props of the moon, Osama bin Laden, a crate of "WMDs" and a rocket engine fall.

Osama bin Laden's cat Buffy switches brains with Ray in "Brains, Brains and Automobiles" as part of a CIA experiment to learn of any terrorist intel.

Roger claims to have been the first on the scene at Ground Zero during the 9/11 attacks in "An Incident at Owl Creek", selling Osama-related t-shirts.

Stan loses his memory while celebrating the capture of the real Osama bin Laden who was managing a "Doug & Busters" restaurant in Florida in "The Boring Identity".