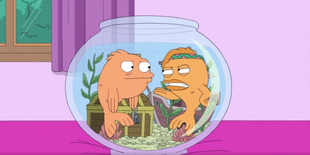 One Fish, Two Fish
Hayley tries to save Klaus from being deported. 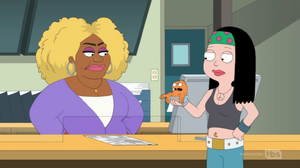 As Hayley tries to fake her birthday at a casual restaurant to impress Danuta, who is off on an adventure, Klaus tries to push legislation to allow vaping near schools, but needs citizenship in order to vote. But when he tries to get it, he finds out he's an illegal alien and faces deportation. To counter Danuta's accusation of not being helpful, Hayley proposes they pose as a married couple, having received a quick divorce from Jeff and marriage to Klaus. But when the agent rejects the idea of a fish married to a person, Klaus prepares to be deported until Hayley takes it even further by placing her brain in another goldfish.

Their attempts to live together put them at each other's throats, but it convinces the caseworker they are really married. But when she admits to being attracted to Klaus, he falls hook, line and sinker for her trap to find out if they are faking it and both he and Hayley are sent to Mexico. When Hayley misses home, Klaus tries to get a friend to take them across the border, but he just tries to rob them and dumps their fish bowl in the desert, but they are picked up by a passing truck and taken across the border. 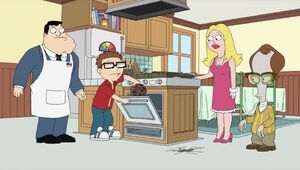 Meanwhile, Stan decides to try a farmer's market in order to cut out the middleman. While there, they pick up a coconut, but, rejecting an offer to open it for them, find it virtually impossible to crack open. Desperate, they employ the 'dark arts' and bring in Criss Angel, who manages to cut open the coconut and reveal Klaus and Hayley inside. When Klaus explains to Stan how they got in their predicament, Stan informs him that the CIA has the power to make people citizens, dubbing him with his desired name of 'Ace McNasty'.