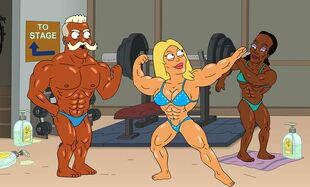 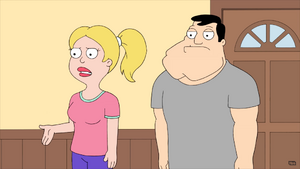 When a new local gym offers a free trial membership, Francine talks Stan into joining with her despite her track record of never finishing things she starts. But when the trial runs out, Stan calls it quits. Francine is depressed at first when she thinks she has to quit too, but decides not to give up her membership when the family points out her habit of quitting. Stan really doesn't pay attention to this until he finds her with a rock hard body. After an intense love-making session, Francine insists on getting back to the gym. Stan finds both himself and the house ignored for her workout routine. Plotting with Roger to get her to quit, they become juiced-up bodybuilders themselves and enter the same tournament as Francine and her partner. 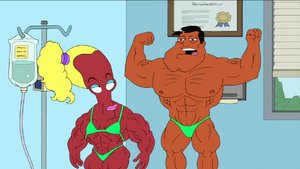 Desperate to beat Stan and Roger, Francine flexes so intensely that it causes her to collapse, leaving her in a coma. In her state, Francine mentally reviews her decisions to quit various items in her life. She concludes that the only thing left for her to do is to quit life itself. However, Stan's voice reaches through to her and begs her not to go. Still feeling like a quitter, she lets Stan know that she has reached the end and it is time for her to quit yet again. Back in reality, Stan feels that he's lost her, but instead, she sits upright and announces that she has decided to quit her coma, just as the doctor arrives to inform the family that she won't recover and recommends pulling the plug. 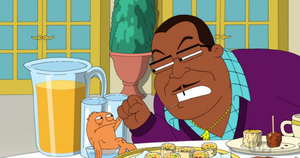 Meanwhile, Klaus gets upset when watching a documentary over the history of the high five. He decides to confront Dusty Baker at a Washington Nationals baseball game where he is invited over for drinks. Dusty at first proves to be a gracious host, but admits that he stole the high five from Klaus. Rubbing his fame in Klaus' face, he proceeds to steal other things from Klaus' personality and even puts on a fish costume to swim in a giant bowl. But when he attempts to breathe underwater like a fish, he ends up drowning.

Retrieved from "https://americandad.fandom.com/wiki/One-Woman_Swole?oldid=82734"
Community content is available under CC-BY-SA unless otherwise noted.