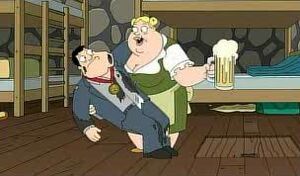 Olga runs a youth hostel for girls in "The Return of the Bling". Roger leads Stan and Steve into a trap at the hostel to recover his Olympic gold medal that Stan wants to return because Roger cheated to win it. Steve is incapacitated by the charms of the girls while Olga the owner intoxicates Stan and Roger recovers his "precious" medal. Just as Stan is about to give up, he sees the spirit of Ronald Regan,circa 1980 who rallies him to recover. Stan recovers the medal and punishes Roger by throwing him in with the British tourist girls.

Olga is voiced by Marianne Muellerleile.

Retrieved from "https://americandad.fandom.com/wiki/Olga?oldid=58831"
Community content is available under CC-BY-SA unless otherwise noted.