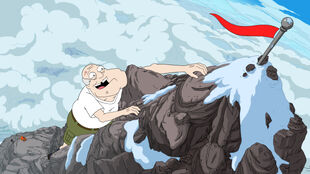 Old Stan in the Mountain
Stan is subjected to a curse that ages him. 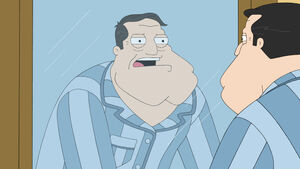 After Stan supports Bullock shafting Ray out of a plum assignment because of his age, Stan becomes overly enthusiastic about his hatred for old people. But when he messes with the wrong geezer at a camping store, a hex is placed on him that turns him into a frail, old man. Stan tries to fight the curse, but fails and ends up getting relived at work when he makes a hash out of the project he stole from Ray. Deciphering the curse, he decides that he must live his dream of climbing Mount Kilimanjaro to break the spell. But when his hearing aid malfunctions on the climb, he believes that Hayley and Steve are out to kill him and vows to get them first. However, his repeated attempts to kill the kids almost fail due to his age, but when he finally cuts Hayley and Steve, he chases Steve near the top of the mountain before finally stabbing Steve. Spotting the top within reach, Stan reaches the summit but falls his way back down. At the bottom, he is teased about being old by a passer-by and tells him being old isn't easy. This change of heart breaks the curse, but as Hayley and Steve are being carried to aid, they note that Stan has turned black and he has to deal with a new curse. 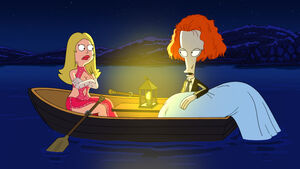 Meanwhile, Roger and Francine practice for a dance contest but Francine fails to catch Roger in a dance move. But When Roger takes Francine on a road trip to a dance competition, she soon finds out it’s not what she bargained for when it turns out that Roger is stopping to pay his last respects to an ex-wife. After the funeral, Roger reveals another secret that he needs Francine's help in digging up the body to bury his ex in a lake. At the lake, Roger reveals he lied again in order to shave the corpse for her red hair for a new wig. On their way to the dance contest, a stunned Francine sorts out Roger's actions and asks him to stop so she can try the dance move she failed at before. As she performs the move, she reveals that Roger's lies inspired her to take action herself and heaves Roger over a cliff, although he shouts up that he still has the car key in his pocket.

Previous Episode /// Old Stan in the Mountain \\\ Next Episode

Retrieved from "https://americandad.fandom.com/wiki/Old_Stan_in_the_Mountain?oldid=79589"
Community content is available under CC-BY-SA unless otherwise noted.