For a complete script, see: "Office Spaceman" on the Transcripts Wiki

Roger: I'm not ready to die. Not before Shatner!

Stan: [after finding the photo of Roger in the paper] How did this happen?!
Roger: I have no idea. I leave the house in disguise, but six Rob Roys later, things happen that I can't be responsible for. Like buying this puzzle. Why the hell did I buy this puzzle?! [begins tearing the nearly complete puzzle apart] I hate puppies! Get out of that tea cup! That cup is for tea! 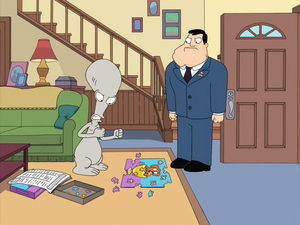 Bullock: Dick, I believe you're up.
Dick: I don't have anything for show and tell. I just found out I have liver cancer.
Bullock: I'm giving you a zero for the day.

Bullock: I need a new team leader.
Jackson: Sir, I'm your man. I will not rest until the alien and all his accomplices are brought to just...
Stan: He told me he hates you.
Bullock: What?! Jackson, is this true?
Jackson: Yes.
Bullock: Get out of my sight! Smith, how do you feel about me?
Stan: You're okay, I guess.
Bullock: Good, then you're the man for this job.

Roger: Guess I'm the boss of you! What's your name?
Stan: Stan.
Roger: Hmm, I already know a Stan. I'm gonna call you Mortimer. Now run and fix me a coffee. Today, Mortimer James! I add the middle name when I'm disappointed in him.

Roger: I'll be in your car, wishing you had a better car.

Stan: [To Roger] You have to take this seriously! Both of our asses are... [Bullock clears his throat] ...equally nice. We both have nice butts.
Bullock: Make that three of us.

Francine: Lefties are the devil's minions!

Roger: [Injures himself with his globe] Why'd you let this happen, Morti? You saw it spinning, you saw me reach for it, and you just stood there. Why'd you just stand there?

Roger: [Sealing a Ziploc bag] Yellow and blue make green. That's how I know it's closed.

Nun: No! Evil! Writing with your left hand! Lefties are the devil's minions!

Stan: There's your alien, men! I pooped him out!

Retrieved from "https://americandad.fandom.com/wiki/Office_Spaceman/Quotes?oldid=87616"
Community content is available under CC-BY-SA unless otherwise noted.