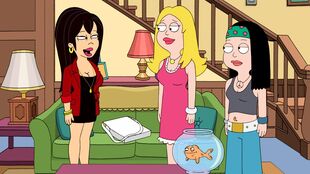 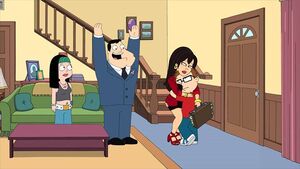 Francine has a nightmare about her sister Gwen burning down a school but is saved by Scott Baio. The next day, the family prepares for her visit although Hayley recalls her criminal activities and is less than pleased about her arrival. Steve is taken with Gwen's beauty and Stan decides to teach him “The Hug” in order to get inappropriately close to her. Her first order of business is to get the family to provide a cover story for her probation officer. Passing the officer's inquisition, she promptly unloads a truck full of fake cell phones into Francine's house. Gwen continues her scams as Hayley tries to convince her to quit supporting her. Stan's training seems to go over Steve's head as Gwen gets the idea that Steve is “special.” Francine accompanies Gwen to unload a liver into a bad neighborhood where they are shot at when Gwen takes the money and the liver. Hayley confronts Gwen about her stunts and she agrees to go with a word of warning for Francine. "Special Steve" gets a winner of a hug with Gwen before she leaves. Francine finds out about Gwen leaving and becomes concerned about her departure as it turns out that Gwen plans on burning down the school in retaliation for being framed by Francine who did the same thing to her. 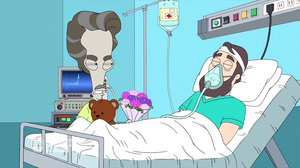 Meanwhile, Klaus is concerned that Roger is missing the activities as he decides to head out to visit a former partner with whom he stole a pirate treasure with in a coma and Klaus volunteers to be his stand in for providing drama emphasis by flicking the lights and making thunder sounds. Arriving at the hospital, Roger is determined to break through his coma. Trying to jump start him with a motor bike and jumper cables, it works until he finds out that he had the wrong person and his former partner escaped with the pirate treasure.

Rushing to stop Gwen, Francine tells Hayley about her being jealous of Gwen, but her attempt to smoke in science class like Gwen set the school on fire and she got blamed for it. They arrive and Hayley acts as an intermediary between the two as they work out their differences. Gwen offers Francine a cigarette to celebrate patching things up, but they set the school on fire and Francine agrees to take the blame and be arrested. But Gwen gets arrested for breaking her parole while Francine's charges are dismissed under a suspended sentence. As a result, she promises revenge when she gets out as Klaus finally gets to punctuate the scene after numerous failed attempts. Roger arrives as a prison guard to chastise him for playing with the lights.