For a complete script, see: "Not Particularly Desperate Housewives" on the Transcripts Wiki

Francine: [panting and running from the wives] They're everywhere! They're coming to get me! I wonder where she bought that top? I mean, HEEEELLLP!!

Stan: [about the Klingon weapon] A shame to waste this. Well, I suppose there's always eBay. Yes, I'll kill the enemies I made on eBay!

Stan: Damn it, Roger, I've told you a million times. No smoking in the house!
Roger: And I told you, it's menthol. So, it's healthier than an apple.

Roger: [to Stan after fighting with him] Don't be starting what you can't finish, bitch.

Klaus: There was a very famous Jewish girl who kept a diary. It ended badly. But enough about Fran Drescher. Ha ha! You thought I was making a Holocaust joke. Shame on you!

Francine: What are you doing here?
Linda: Duh, it's Wednesday, our grocery shopping day.
Francine: Isn't that crazy? I thought my boring routine was killing me, but it ended up saving my life. And that fake lesbian kiss, what a great idea!
Linda: Fake? Oh, yeah... of course. Fake.

Steve: [after being locked in Hayley's closet] I can't make it on the outside. I'm an institutional man now.

Stan: [while reading "The Erotic Reagan" book] Francine, why are you dressed so nice? Those chicks from The View aren't going to burst in here and give me a TV makeover, are they?
Francine: I'm going to an art gallery. I'm trying to make a good impression on the Ladybugs.
Stan: [sadly] So... no makeover?
Francine: If they like me, it's goodbye, boring routine. Hello, exciting charity events, social functions, and book clubs where we just get drunk and complain about our husbands' lack of interest.
Stan: [still reading] What, now? I'm sorry, I wasn't paying attention. (laughs) Not even a little. 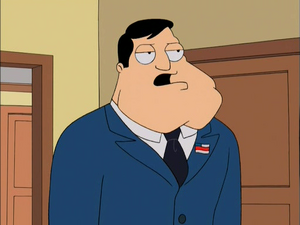 Stan: What the hell is that?
Francine: This is Fussy. His owner was killed, and he needs a home.
Stan: No way, Francine. We're Smiths, and Smiths have manly dogs. This dog couldn't be any more effeminate, even if it had 20 vaginas. And then it would just be a freakish mutant. Or a beautiful symbol of fertility.
Francine: But...
Stan: Forget it, Francine. We already have something girly and annoying in this house. It's called Roger.

Retrieved from "https://americandad.fandom.com/wiki/Not_Particularly_Desperate_Housewives/Quotes?oldid=88947"
Community content is available under CC-BY-SA unless otherwise noted.