No Weddings and a Funeral 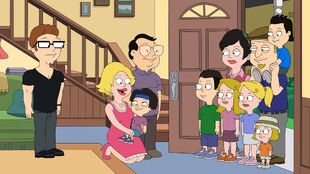 No Weddings and a Funeral
Klaus leaves the family.

Roger's Disguise: Phil Spector from "The Future is Borax" 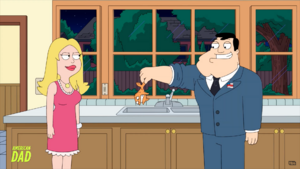 When Stan berates Francine for flushing chicken bones down the disposal, Klaus tries to chime in, only to have the entire family turn on him, leaving him dangling over the whirling blades of the disposal while they go out for ice cream. Later, Klaus loudly announces that he is leaving and storms out. Fifteen years later, word spreads through the family of Klaus' passing. In the meantime, Hayley and Jeff have had several children, Steve is a rich tech entrepreneur, Stan and Francine are divorced with Francine remarrying Toshi who has picked up French, Stan is destitute, and Roger has revealed his presence to the world.

The family is gathered by Sister Madeline, a nun who reveals Klaus' backstory, although the family isn't impressed. She insists that they throw a proper funeral for him, but when she steps outside, 'she' reveals herself to actually be Klaus. However, Roger quickly sees though the ruse and hatches a plan with him to fool the family. 'Her' attitude causes Steve and Hayley some suspicion and Stan and Francine can barely focus on Klaus. 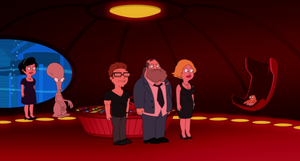 During the funeral, the family can only laugh at Klaus' foibles until he bursts out, admitting his ruse. He gasses the family and when they awaken, he reveals that their minds have been inserted into his body. As they struggle to learn how to move Klaus' physical body, they cause a fire. Klaus is unconcerned because this has become a suicide attempt. They find that one of Hayley's kids had been left behind after Jeff is sent home with the rest. However, it is one with a psychotic streak. They manage to get rid of him thanks to a peanut allergy and find that when they insult Klaus, they actually bond. Klaus appreciates being useful and pulling all together, they get Steve's pleasure bot to get them out of the house. Stan and Francine remarry and the family reconnects as Klaus celebrates being the glue that holds everyone together.

Previous Episode /// No Weddings and a Funeral \\\ Next Episode