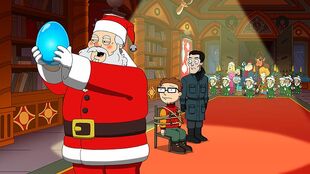 Plot: The episode opens with children working in a mine as one of them discovers an egg-shaped gemstone. It is taken to Santa, who gloats about having one of the stones he needs. 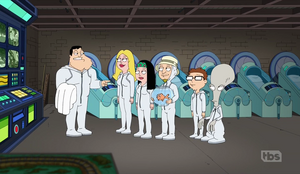 Meanwhile, Christmas Eve finds the Smith home decked out for the holiday, but the family members have been replaced with dummies and the actual family is in the basement preparing to go into stasis chambers to hide from Santa, as well as other holiday mischief that has occurred previously. As Jeff goes into stasis first, the family finds that Steve has placed his dummy in his chamber and vanished outside. They discover through Klaus' inspection of Steve's browser history that he has taken off to ride a Christmas train. As they set off in pursuit, Roger activates the booby-trapped Jeff figure, sending his chamber off into the sewer to be dumped in the ocean. 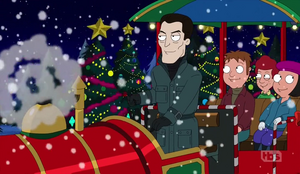 Arriving too late to stop the ride, they are dismayed when it returns empty and the parents have seemingly forgotten about their children. They find that candy canes given to the parents have drugged them. As they fear they won't discover what happened to the children, Puddin, an elf that was banned from the North Pole, informs them that they have all been kidnapped by Santa. He tries to take them along in a second train, but it smashes into a mountain when Puddin's magic that had been removed fails to open the secret passageway. 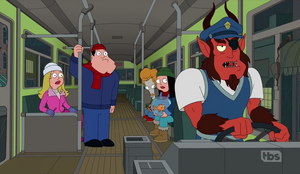 With one option left to find some Christmas magic to open the passageway, they travel to Baltimore where Jack Smith has given up on being Krampus and has become a bus driver, although he grudgingly agrees to help them. Meanwhile, Steve thinks working in the mine is just a holiday simulation of digging coal until he observes a boy collapse and is dumped into a crevasse. Trying to escape, he runs into Santa who at first believes he is there to stop his plot. When he comes to understand that it was simply chance that brought Steve to him, he orders his henchman to cut Steve's throat with an ice skate but he is saved by the timely arrival of the family. They are quickly captured as well, but the arrival of a second stone puts Santa in the mood to toy with them, offering their freedom, until their indifference to his scheme results in orders to capture them again. 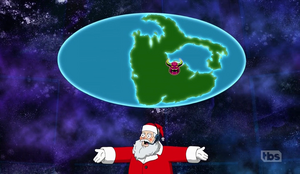 Santa details his plan to harness the powers of a slain Sumerian giant in order to become all-powerful by placing the stones back into the eyes of its stone remains. However, his plan backfires when the giant is reawakened, and sucks in much of the North Pole, including Santa himself. Trying to escape in one of the trains, Steve's flat refusal to have any Christmas spirit only powers the train in reverse, toward the giant. His strong negative feelings soon propel the train at enough speed to sever the head from the giant, saving everyone. As the family celebrates having yet another of their unusual holidays which have become a tradition of their own, they set off with the surviving children as Jack/Krampus decides to stay behind and take over Santa's castle. As the camera pans over the wreckage of the North Pole, Santa's gloved hand is seen grasping the opening of the giant's torso as he works his way free.

Retrieved from "https://americandad.fandom.com/wiki/Ninety_North,_Zero_West?oldid=79061"
Community content is available under CC-BY-SA unless otherwise noted.