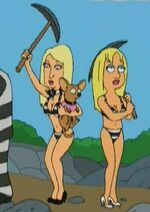 She appears with one-time friend Paris Hilton and her dog Tinkerbell in The Simple Life: Life Without Parole, the two in a prison which Stan uses to show the senate the evils of television in "A Smith In The Hand".

Nicole appears as one of the celebrity robots in "Tearjerker".

Retrieved from "https://americandad.fandom.com/wiki/Nicole_Richie?oldid=68913"
Community content is available under CC-BY-SA unless otherwise noted.