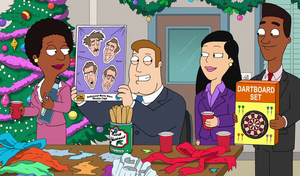 Duper is stuck with a set of Nicholas Cage stickers and a tin of breadsticks at the annual CIA "evil Santa" gift exchange in "Gift Me Liberty", prompting ribbing by Avery Bullock to the amusement of his coworkers.

Retrieved from "https://americandad.fandom.com/wiki/Nicolas_Cage?oldid=77387"
Community content is available under CC-BY-SA unless otherwise noted.