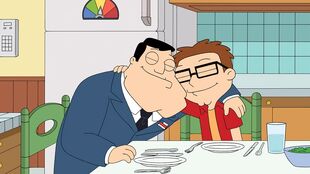 Next of Pin
Stan and Steve bond over bowling. 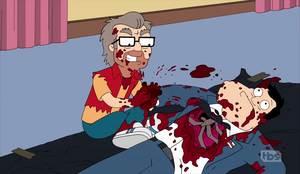 After seeing a news report about a murderer who killed his father for not spending time with him, Stan sets out to find an activity for himself and Steve, but his lack of talent just frustrates him. Ordering him to put a basketball back into the garage, Steve rolls it in and not only knocks down a stack of cleaning supplies that were lined up in a pyramid, but the ball bounces off and closes the garage door as well. Impressed, Stan takes them out bowling where Steve turns out to be a natural, but when he wins a big tournament, an expert bowling coach suggests that Stan is holding him back and under his tutelage, Steve could become a pro bowler. 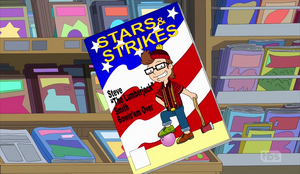 As Steve wins his way to the top, Stan's enthusiasm is tinged with both joy and sadness, mirroring Steve's who would rather bowl with his dad. When he gets out of hand at a match, Stan finds himself banned from the bowling alley. Refusing to give up, Stan sneaks in disguised in a hoodie with a celebratory cake, but finds that if Steve wins the final match, he can turn pro and move on away from his dad and family. Determined to stop him, Stan sneaks in and stabs Steve's ankle, ruining his chance in addition to the injury. Angry about being stabbed and the lack of interest by the police, Steve enlists Stan to help him discover his assailant's identity. Stan goes along half-halfheartedly, and tries to distract Steve who does his own detective work and finds footprints in the bowling alley that lead him outside to the dumpster containing the hoodie, knife and receipt for the cake that Stan ditched. Stan tries to eat the cake before Steve finds it, but is caught in the act. They both share their stories of frustration in the decisions they made, but when Stan dismisses the idea that the stabbing hurt as much as claimed, stabs himself several times until he collapses. After a trip to the hospital for both of them, a detective is impressed with Steve's skill and hires him on for a case, but when he finds a pile of body parts, he vomits and finds he has no stomach for the job. 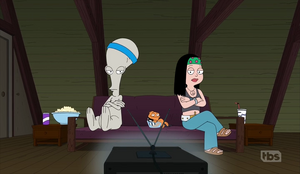 Meanwhile, Klaus is dumbfounded at Hayley and Roger's lack of attention to the happenings of Steve and Stan so he sets up a challenge of their attention span by making them sit through an hours-long PBS documentary. At the end of the show, it appears that Roger has won due to Hayley drifting off to sleep, but when they try to congratulate him, he cracks and crumbles before their eyes. They trace his footsteps to the closet where they find he had molted out of boredom and took the opportunity to escape and watch online yas cat videos. Hayley joins in to Klaus' frustration as Roger explains that a short attention span isn't necessarily a bad thing, but loses track of his thought and even forgets Hayley's name.

Previous Episode /// Next of Pin \\\ Next Episode

Retrieved from "https://americandad.fandom.com/wiki/Next_of_Pin?oldid=78942"
Community content is available under CC-BY-SA unless otherwise noted.