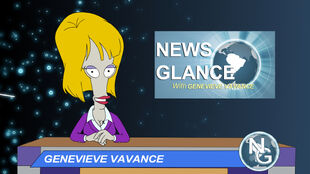 Roger's Disguise: Greek Calypso dancer from "Naked to the Limit, One More Time" 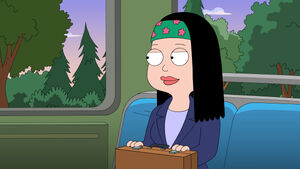 As Steve looks forward to being able to ask questions in sex ed, Hayley announces her new job for a news reporter. But on her first day, she discovers she is working for Roger's persona of Genevieve Vavance. Hayley chomps at the bit to do an expose on Garbage Island, but Genevieve is only interested in ratings. Meanwhile at Steve's class, he is humiliated by his question asking if vaginas can suck someone in. Hayley talks him into faking his disappearance to score points to be allowed to do her own story and hides him in a cabin in the woods. She calls it in to Roger and gets her shot. 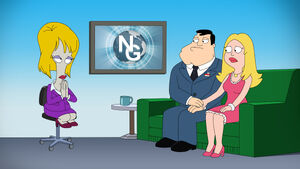 Roger presents the story of Steve's “disappearance” but hedges on Hayley's story as the neighbors form a vigil for Steve as Hayley suddenly has doubts due to Francine and Stan's sadness and admits it is faked. Roger talks her into putting off telling the truth while he milks it another day. As the story airs, Steve's female classmates express their wish that they could have had a shot with Steve and he becomes excited while watching it on television. Roger aggressively accuses Stan and Francine of killing Steve and doctors the tape into a confession and stages a reenactment framing them, and ends by calling in a police officer to arrest them.

As Hayley threatens to tell the truth, Roger forces her on to present her story. But when she starts to reveal the truth, she is forced out. She goes to Steve, but Roger follows and tries to make it appear that Hayley was the real kidnapper. Roger blackmails Steve into going along with his kidnapping story and Hayley runs for it. Taking refuge in a diner, she sees Roger's “Homecoming Spectacular” presentation on television. As Steve sees his sister demonized, he suddenly realizes what has happened and despite the girls in the audience, tells the truth as Hayley arrives and blames the entire affair on Genevieve. Roger creates a distraction and escapes as the family reunites.