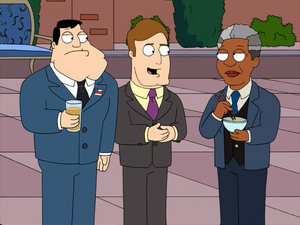 Nelson Rolihlahla Mandela (18 July 1918 - 5 December 2013) is a former President of South Africa, the first to be elected in a fully representative democratic election, who held office from 1994 to 1999. Before his presidency, Mandela was an anti-apartheid activist, and the leader of the African National Congress's armed wing Umkhonto we Sizwe. The South African courts convicted him on charges of sabotage, as well as other crimes committed while he led the movement against apartheid. In accordance with his conviction, Mandela served 27 years in prison, spending many of these years on Robben Island. Following his release from prison on 11 February 1990, Mandela supported reconciliation and negotiation, and helped lead the transition towards multi-racial democracy in South Africa.

Nelson Mandela is introduced to Stan by Greg Corbin in "Daddy Queerest" at a party hosted by Avery Bullock. Stan mistakes him for Morgan Freeman.

When picking out their first joint checks in "Home Wrecker", Hayley opts for Nelson Mandela in a bikini despite Jeff's belief that he is a football player.

Retrieved from "https://americandad.fandom.com/wiki/Nelson_Mandela?oldid=68917"
Community content is available under CC-BY-SA unless otherwise noted.