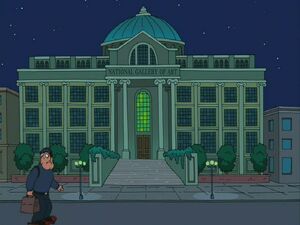 The National Gallery of Art, is the planned target of a jewel heist by Jack Smith in Con Heir.

Jack tells Stan that he’s retiring and asks Stan to take his place, if he can help Jack complete one last mission. Jack goes over the mission with Stan. They have to break into the National Gallery of Art because terrorist have smuggled uranium into the country inside Egyptian artwork. Jack and Stan have to get the uranium before the terrorists do.

Jack and Stan begin their break-in. Jack and Stan break into the vault. Stan starts looking for the uranium, but Jack just collects valuables. Stan realizes the truth about his father. After a chase, Jack agrees to give up crime but steals Stan's SUV as one last crime...until he breaks open a parking meter.