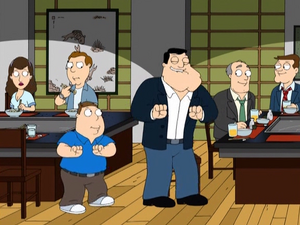 Nathan is a young boy who makes many background cameos.

Nathan dances with Stan in "Stan's Night Out". When Stan ditches Francine to spend the evening out with the guys at a restaurant named Benihana-Ish, Stan is so happy to be hanging out with the guys he starts dancing. Nathan joins in until his father tells him to stop because he keeps getting molested. Stan is surprised when the guys tell him they will next be heading to the Cigar Bar and Nathan asks if they'll be keeping the party going until his father yells at him again.

Retrieved from "https://americandad.fandom.com/wiki/Nathan?oldid=92752"
Community content is available under CC-BY-SA unless otherwise noted.