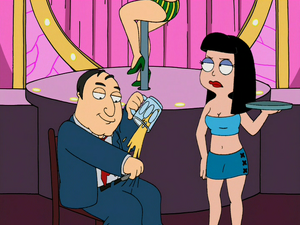 Nat Faxon is an American actor and comedian. He is best known for his appearances in comedic films such as Orange County, Walk Hard: The Dewey Cox Story, and several Broken Lizard films including Beerfest. He has had recurring roles in several television series such as Joey and Reno 911! and was featured in a series of prominent Holiday Inn commercials featuring Joe Buck. Faxon won an Academy Award in 2011 for Best Adapted Screenplay for co-writing the film The Descendants.[1]

Nat provided the voice of a patron at Mentally Deficient Young Women in "Stan Knows Best", the director in "News Glance With Genevieve Vavance" and has another voice credit in "Shallow Vows".