Naked to the Limit, One More Time 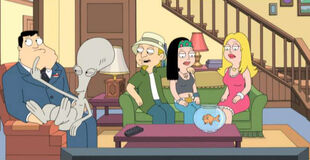 Naked to the Limit, One More Time
When Jeff figures out that Roger is an alien, Stan orders that either Roger or Jeff must be killed immediately.

Roger's Disguise: CatWoman from "There Will Be Bad Blood" 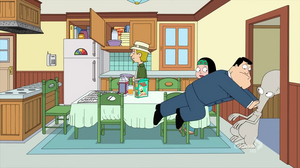 During a family breakfast, Roger starts to stroll into the kitchen without a disguise and is quickly tackled by Stan who insists that Roger must wear a disguise around Jeff or risk his blabbing and forcing Stan to have to kill one or the other. Roger tries a stupid Carmen Miranda disguise in spite but is kicked out of the kitchen again by Stan. As Roger tries to figure out a solution to his dilemma, Hayley tells him about Jeff having an imaginary friend named Phillip who was the best man at their wedding. Roger introduces himself as Jeff's new imaginary friend and Jeff is happy after having a falling out with Phillip. Roger demonstrates in front of the family that he has apparently fooled Jeff, eventually abusing them knowing they can't react to his presence. Klaus gives the game away when he asks Roger to change the television channel and they are forced to reveal that Roger is really an alien. Stan pulls his gun, determined to shoot either Jeff or Roger to keep the secret safe. Hayley intercedes for Jeff and Francine speaks up for Roger as Jeff promises to keep the secret. But no sooner than Hayley assures Stan that Jeff can keep the secret than he is on the phone telling a guy about Roger, leaving Stan and Hayley in disbelief. Stan preps the basement and loads one gun of two with bullets and prepares to shoot Jeff or Roger using random chance to decide. Roger begs for his life and vows to return to his own planet which satisfies Stan although just to see which gun was loaded he fires them both into the ceiling and it turns out the loaded gun had been pointed at Jeff. 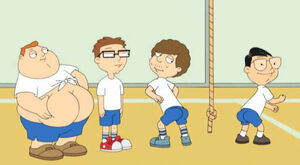 Meanwhile, the class celebrates Toshi's butt forming, leaving Steve the sole member with a flat rear. He tries to stuff his shorts without luck until Francine helps by cutting a ham in half to use as butt cheeks. At school, Steve shows his new butt off, although Barry smells the ham, believing it to be in his own belly button at first but eventually jumps on Steve and pulls it out of his pants in front of others. Steve goes home to complain that his mother's plan failed and goes to his room after denouncing God for leaving him in such shape. At school, Steve observes Principal Lewis walking by with a big butt and finds out that Lewis' secret is Ba-Donkin Donutz. Heading to the doughnut shop, Steve picks up a dozen to get started, but another overweight customer’s corduroy pants throw sparks that set off a doughnut grease fire. As everyone gets jammed into the door from being overweight, Steve finds he is the only one that can squeeze through to call for help. But when he speaks to 911, he starts feeling good about himself and fails to pass on the critical information, leaving the doughnut shop to explode with everyone else trapped.

Going to Thrifty Storage where his spaceship is stored, Roger regretfully sends out a homing signal and is sent back a notice to meet at the base of the Chimdale mountains. Roger says his goodbyes to the family and as Stan arrives to take him to his rendezvous, Roger reminisces about his past with the family. After a false alarm at the Chimdale mountains as the family watches Brian Lewis go through a drug deal and murder the deliverymen, Roger's ship arrives and even Stan is moved to tears, giving Roger his flag lapel pin as a reminder. As Jeff gives Roger a goodbye hug, Roger tosses him into the ship's tractor beam which sucks Jeff up and then immediately takes off, leaving Roger to note that he always had a solution and Stan happy as well, with Hayley to mourn Jeff's loss.

Previous Episode /// Naked to the Limit, One More Time \\\ Next Episode