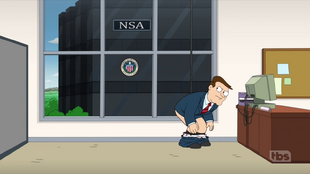 N.S.A. (No Snoops Allowed)
Steve goes to work with Stan and discovers the N.S.A..

Roger's Disguise: Madame Buttercup from "Cock of the Sleepwalk" 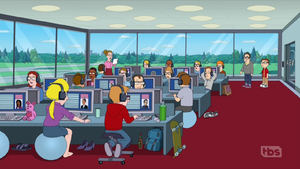 Stan wants to join Facebook at work but can't figure it out so Steve volunteers to come in and help him. There, they find the N.S.A. has built a new building that blocks their view. Stan explains the rivalry between the two agencies to Steve, noting that the N.S.A. diverts funds from the CIA. As Steve works on the system, he gets left behind while the agents go to lunch, which upsets him. Steve gets a message that he's being watched and finds that the N.S.A. wants to recruit him. He finds that the N.S.A. considers itself the smarter of the two agencies and wants to take advantage of his skills by stealing Stan's outdated floppy disks for the secrets they contain so they can further weaken the CIA. As the CIA agents poke fun at Steve, he gets to listen in. He tells Stan that he needs to take Stan's disks out for cleaning. Taking them to the N.S.A., he finds he has been discarded now that he is of no further use to them.

Back at their home, he dreams of them living in poverty until the country is overrun by the Cubans. He confesses to Stan what he has done. He gets the cold shoulder as he is sent out to be on his own in his treehouse. Stan arrives and admits that he was sorry for the things he said but he sent him out to avoid being heard by the N.S.A.. They go to their office to recover the drives and break in to find the agents are waiting on them. However, they are unaccustomed to firing their weapons and are quickly overmatched by the physically able Stan. Getting into the computer room, Steve takes out their computers, destroying the secrets. 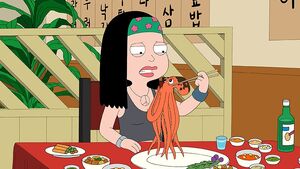 While Klaus fixes omelets for breakfast, Hayley tries it and finds it contains meat to her horror. As she tries to be sick, Roger gets her to admit she liked it and talks her into eating meat for an entire day. As she indulges herself, she decides to try exotic meat and they head to Koreatown. Downing an octopus, she goes even further and wants to eat a gorilla that can speak sign language and Roger sets her up with one. As they finish, Hayley feels like she made a mistake, especially when they find they are captured by a rogue fish and game agent who shakes them down, but has to split the take with the gorilla.

Retrieved from "https://americandad.fandom.com/wiki/N.S.A._(No_Snoops_Allowed)?oldid=78837"
Community content is available under CC-BY-SA unless otherwise noted.