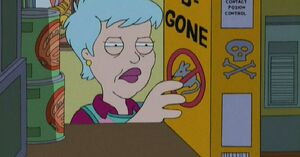 Mrs. Marylin Thacker is the wife of Lt. Eddie Thacker.

Eddie and his partner Chris come to investigate the wreck of Jim who commits suicide by driving in front of a train when he finds his fiancee cheating on him in the saga of The Golden Turd in "Failure is not a Factory-Installed Option".

When he sees the gold turd, he hides it from his partner and takes it home to Marilyn. They begin to speak of how it will pay for a great retirement and a house in Boca Raton, but Eddie regrets his decision and wants to take it back and face the consequences. He's a week from retirement and afraid that he might get fired if found out. They argued until Eddie is starting to believe the gold is affecting them. Marilyn apparently realized he's right and accepts his decision, but when she starts making tea, she adds rat poison to his cup.

In "Blagsnarst: A Love Story", it is revealed that she was executed for killing her husband at Virgina State Prison with her son, Vincent Edmonds as a witness. He soon found the Golden Turd, hidden away under a floor panel in their family home.