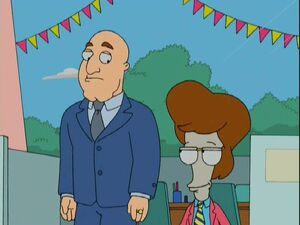 Mr. Fusfeld is the owner of Fusfeld Motors, where Roger gets a job as a salesman in "Rough Trade". When Maria threatens to destroy him in the sales contest with a trip to Hawaii as the prize. When Roger is threatened with being fired by Mr. Fusfeld for not selling any cars, Roger gets help from Phillip but Phillip puts his name on Roger's sales, stealing his prize.

Retrieved from "https://americandad.fandom.com/wiki/Mr._Fusfeld?oldid=52035"
Community content is available under CC-BY-SA unless otherwise noted.