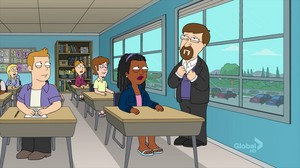 Mr. Brink is a frequent background character, often appearing as a teacher or professor.

He gives Stan a psychiatric exam in "Roger Codger" and can be seen in the Red State Grocery in "Not Particularly Desperate Housewives".

He attends Roger's wedding to Sharri Rothberg in "An Apocalypse to Remember" and can be seen at the hearing in "The Magnificent Steven".

Mr. Brink teaches class at Rutgers in "Spring Break-Up" as Stan searches for Jessica. He also appears at the synagogue when Stan takes Francine there on a date in "Shallow Vows".

A slow janitor solves his theorem at Groff Community College in "100 A.D.".

Steve and Akiko Yoshida trick-or-treat at his house in "Best Little Horror House in Langley Falls" and he warns them that Toshi is looking for them. He is also shown to have a sizable dolphin collection.

He eats at the title restaurant in "Stan's Food Restaurant" and is passed by the dishwasher at the zoo in "Gorillas in the Mist".

He can be seen at the resort buffet in "Killer Vacation" and at Niagara Falls in "American Stepdad".

When he assigns the kids in his class at Pearl Bailey High School to write a report about their own fathers in "The Adventures of Twill Ongenbone And His Boy Jabari", Stan isn't interested in talking to him. With his friends listening in over a speakerphone, Steve tries to get more info from his dad and Stan launches into detail about killing people which horrifies the boys. When Steve realizes that he can't use that as a story, he calls again and the boys get an earful about Stan's sexual relations with Francine. Steve tries to blow off the assignment, but when pushed by Mr. Brink, he calls up Stan again, who launches into a depressing monologue about killing himself, causing Mr. Brink to throw himself out the window.

Mr. Brink later appears as a professor at M.I.T. in "National Treasure 4: Baby Franny: She's Doing Well: The Hole Story" when Francine sets out to solve an impossible math problem, only to find out from Mr. Brink that she made a mistake.

He attends the town council meeting regarding the new football arena in "Roots", a grey-haired version of his design appears at the CIA photo presentation in "The Devil Wears a Lapel Pin" and appears at the dog race at Langley Derby Racetrack in "Fleabiscuit" . He is also present in Stan's hallucination of his organs for sale in "The Old Country".

In "Roger Codger", Mr. Brink is voiced by Rob Corddry

Retrieved from "https://americandad.fandom.com/wiki/Mr._Brink?oldid=93031"
Community content is available under CC-BY-SA unless otherwise noted.