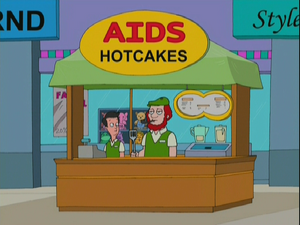 Mr. Aids runs a hotcakes kiosk at the Langley Falls Shopping Mall in "Finances With Wolves". When questioned by his helper Jimmy, Mr. Aids believes the reason he is doing poorly in business is because he is Irish.

Mr. Aids walks though the mall in "The Best Christmas Story Never".

He can be seen on the cruise during Francine's rampage in "The Vacation Goo".

He appears on stage at the end of "Phantom of the Telethon".

He passes through the lobby of the Langley Falls Country Club in "In Country...Club".

He has a crowd scene cameo on the doomed bus in "100 A.D.". However, he is also seen at the Chimdale Mountain Inn at the end of the episode.

Mr. Aids shows Francine how to pick ripe cantaloupe at the grocery store in "The Boring Identity".

Retrieved from "https://americandad.fandom.com/wiki/Mr._Aids?oldid=84300"
Community content is available under CC-BY-SA unless otherwise noted.