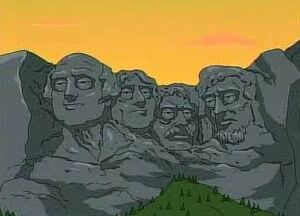 Mount Rushmore is a massive stone sculpture on the side of a mountain face in South Dakota. From left to right, the movement features the faces of George Washington, Thomas Jefferson, Theodore Roosevelt and Abraham Lincoln. The monument, which was carved and blasted from natural rock between 1927 and 1941, has become a major tourist attraction.

Stan dives off of Mount Rushmore while tripping to My Morning Jacket music in "My Morning Straitjacket".

Radical Occupy terrorists brainwash Stan into blowing up Mount Rushmore in "Honey, I'm Homeland", but when the missiles are fired, they are taken out by a newly-installed CIA anti-missile laser defense and it is revealed that it was all a test of the system.

Retrieved from "https://americandad.fandom.com/wiki/Mount_Rushmore?oldid=49566"
Community content is available under CC-BY-SA unless otherwise noted.