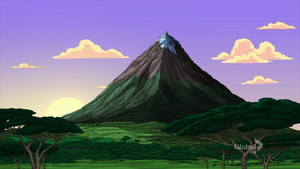 Kilimanjaro, with its three volcanic cones, Kibo, Mawenzi, and Shira, is a dormant volcano in Kilimanjaro National Park, Tanzania and the highest mountain in Africa at 5,895 metres or 19,341 feet above sea level.

In "Old Stan in the Mountain", Stan Smith chides Ray about his age and says that he intends to one day climb Mount Kilimanjaro. But when he messes with the wrong geezer, a hex is placed on him that turns him into a frail, old man. Deciphering the curse, he decides that he must live his dream of climbing Mount Kilimanjaro to break the spell. But when his hearing aid malfunctions on the climb, he believes that Hayley and Steve are out to kill him and vows to get them first. However, his repeated attempts to kill the kids almost fail due to his age, but when he finally cuts Hayley and Steve, he chases Steve near the top of the mountain before finally stabbing Steve. Spotting the top within reach, Stan reaches the summit but falls his way back down. At the bottom, he is teased about being old by a passer-by and tells him being old isn't easy. This change of heart breaks the curse, but as Hayley and Steve are being carried to aid, they note that Stan has turned black and he has to deal with a new curse.

Retrieved from "https://americandad.fandom.com/wiki/Mount_Kilimanjaro?oldid=63688"
Community content is available under CC-BY-SA unless otherwise noted.