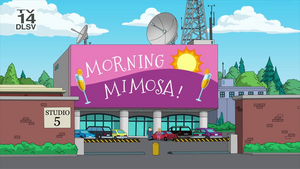 Morning Mimosa is a daytime talk show hosted by Trish and Suze in which the hosts get drunk on mimosas and encourage their audience to do the same as well, causing them to become cruel to the guests.

In the episode "Morning Mimosa", Steve creates a series of Youtube videos for cooking while posing as an orphan when a spat between himself and Francine escalates after he curses her, causing her to ignore him until he can do things on his own, which in turn causes him to reject her back.

Steve's videos get him an invitation to the show, but when he finds that the audience has no pity even for him, he creates the wrong dish. Francine arrives to defend him, but Suze encourages the audience to attack both of them, causing them to follow pair of escaped monkeys to the W-ANG Studios newsroom where they fall through the ceiling during Greg and Terry's newscast.

Roger is nearly exposed on the show for his multiple personas by Hayley in "The Enlightenment of Ragi-Baba", but manages to escape to "find himself" spiritually.

The pair award Snot with a three-day "celebration" due to being poor, having been recommended by Steve in "Roger's Baby". But when the latter finds that Snot resents being treated as poor, the two conspire to hide on the third day. Their efforts send Trish and Suze into a frenzy at having their event ruined, as they chase the pair for the day.

In "Paranoid Frandroid", Stan is revealed to have purchased the show and runs it to keep Francine blissfully unaware of the real world's dangers.

"Thursday Birds Day" is shown in "Shell Game". Steve and the egg protectors attempt to head off The Order of the Hand and Nest from stealing eggs. When Trish freaks out over a parakeet on her head, bird handler and beefcake Scott notes that she has a nest of eggs backstage. Steve manages to head off Roger, disguised as a snake from stealing them.

In "No Weddings and a Funeral", in a sequence set 15 years in the future, Francine watches a holographic version of Morning Mimosa.

Francine watches Morning Mimosa Nights in "Eight Fires" where she becomes intrigued with learning how to cook by Francis Mallmann.

Retrieved from "https://americandad.fandom.com/wiki/Morning_Mimosa_(Television_Show)?oldid=85034"
Community content is available under CC-BY-SA unless otherwise noted.