For a complete script, see: "Moon Over Isla Island" on the Transcripts Wiki

Steve: Mom! We were playing a game!
Snot: And I won.

[Snot's mom opens the door to see Steve in an upper body cast]
Snot's Mom: My God! Steve, what happened?
Steve: Diving for a touch pass. You know, playing sport ball.
Snot's Mom: You poor boy! Well, Schmuely's not home.
Steve: Snot's real name is Schmuely? That is just so good to know.

Steve: Hello, Schmuely.
Snot: The fuck did you just call me?

Snot: Your mom's going to touch more sack than a medieval grain merchant on inventory day.

Stan: Apologize? For what? For giving him power over an island full of half-naked Hispanic men? That's his dream...the the premise of three of his screenplays.

Bullock: When da Vinci first conceived of it, he called it an aerial screw.
Stan: That seems a bit lewd.
Bullock: Well, da Vinci was a well known sexual deviant. You know that sketch of the naked man in the wheel? Blueprints for a rape machine.

Steve: Why aren’t you getting up?
Snot: I’m waiting for my wrestling rager to go down. 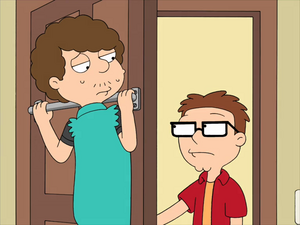 [Steve runs through the house opening various doors, looking for Snot]
Snot: Steve? I thought your mother would be opening the door.
Steve: Well, she didn't.
Snot: So, uh, this has gone too far, hasn't it?
Steve: I would say so. I would, uh, say so.
[There is a long, awkward pause]
Steve: You know what the worst part of this is? I can feel your heart beating.

Retrieved from "https://americandad.fandom.com/wiki/Moon_Over_Isla_Island/Quotes?oldid=89110"
Community content is available under CC-BY-SA unless otherwise noted.