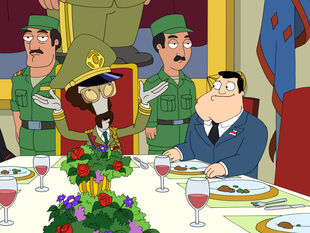 Moon Over Isla Island
Stan must convince an island nation's dictator to sign a treaty in order to get a promotion. 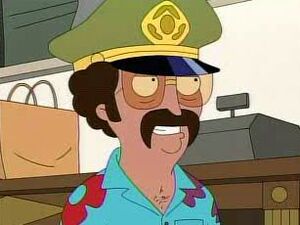 Stan constantly makes promises to hang out with Roger but never fulfills his end of the bargain. Soon, he is assigned by the CIA to convince General Juanito Pequeño the dictator of Isla Island to sign a treaty in order to get a promotion at work and allow the US to mine the island's oil reserves. When Stan meets the general and accidentally kills him by telling him to eat his corndog whole, only to fall down an upwards escalator and die, he gets Roger to pose as the leader of the small island nation, leading to believe that they are staying at a hotel. Unfortunately, Roger's criticisms of certain things like the food or dusty floors ends up getting the servants killed, forcing Stan to trick Roger into signing the treaty pre-emptively.

However, Roger finds out about the plot when he double checks the parchment. Tired of Stan using him and abandoning him all the time, he decides to continue posing as the general and have Stan deported. He then changes the island's name and national anthem and starts commanding the people of Isla to paint the island yellow, but is not satisfied by the time it is half done and demands it be repainted turquoise. The people of Isla grow agitated and start planning a revolution.

As the CIA had no interest in stopping it, Stan realizes that using people is wrong and goes back to Isla to warn Roger. Unfortunately, he believes that Stan is going to use him again and throws him out of the palace just as the revolution starts. Thinking quickly, Stan brings out the real general's corpse and calls out the rioters that their quarry is escaping. He then leaves the body in his helicopter before destroying it; Roger then realizes that Stan was right and heads right home. A new dictator is appointed and while initially loved by the people, an epilogue shows that he became the most brutal ruler in the island's history. 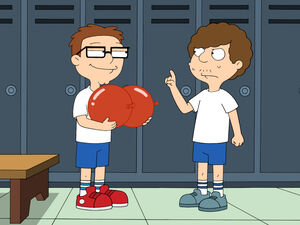 Meanwhile, Steve and his friends act out the The Little Mermaid. While swimming, Snot appears to be drowning in the pool when he is actually portraying a character from the movie. Francine quickly jumps in and saves him, holding him close to her breasts. Snot then starts to gloat about it to his gym class, only for Steve to find out and swear to get revenge. He feigns being injured to get touched by Snot's mother. Eventually, they realize that they have gone too far after Steve touches Snot's privates.

Retrieved from "https://americandad.fandom.com/wiki/Moon_Over_Isla_Island?oldid=91752"
Community content is available under CC-BY-SA unless otherwise noted.