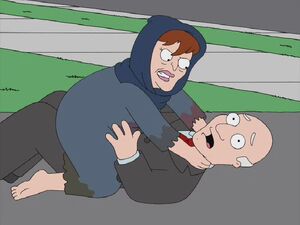 Miriam Bullock was Avery Bullock's wife and the adoptive mother of Avery Jr.. In "One Little Word" Avery Bullock reveals that Jr. is making it a challenge to score with girls and passes Avery Jr off to Francine, causing Roger to become jealous. When Francine becomes too frazzled dealing with the two of them, Stan hits on the idea of bringing Miriam back from the Middle East to deal with him. When Stan brings her back, he reveals that she has been brainwashed and wants to destroy America. Miriam tries to take Jr. hostage, but when Miriam finds out the baby is hers, she warms up to him, briefly naming him "Muhammad". Roger is heartbroken that Avery was taken away and steals him back, but when Jr. breaks one of Roger's crystal spiders, he tries to drown him. Stan stops him and Roger concocts a plan to get them out of trouble by making it look like Coco, Bullock's latest fling, kidnapped the baby. Bullock and Miriam rush in to save Jr., but when Miriam finds out Avery has a mistress, shoots Avery in the kneecap and takes Jr. with her.

She is by Avery's at their party in "Daddy Queerest"

Miriam appears in a cameo with Avery Bullock at the end of "Shallow Vows".

A heckler insults Avery and Miriam in "Great Space Roaster".

When Stan objects to Avery's hiring of Francine in "Flirting With Disaster", he questions if Bullock would like Miriam around the office. Bullock's retort involves pointing out Miriam's affairs with black men in a Red Lobster parking lot.

Miriam is seen in a flashback in "Ricky Spanish" revealing that Roger, as Ricky Spanish, kills Miriam at her birthday party from behind with a sword.

Miriam is voiced by Jean Smart.

Retrieved from "https://americandad.fandom.com/wiki/Miriam_Bullock?oldid=67754"
Community content is available under CC-BY-SA unless otherwise noted.