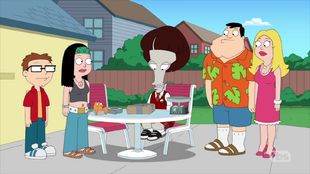 Mine Struggle
Stan discovers a salt mine in the backyard. 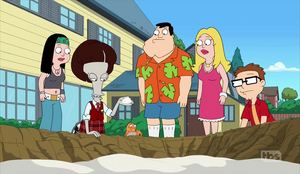 A series of flashbacks feature Smith family backyard picnics until modern-day Francine yells at Stan to clean off the patio. As Roger asks for Stan's signature for a field trip, he offers his souped-up power washer to help him, which digs a huge hole in the yard, revealing a white mound. As the family looks it over, Roger tests it and pronounces it to be salt. Stan talks to the Gordon's Salt Company and gets an offer to put in a salt mine, but meets resistance from the family, who fear the damage to the property. Determined to follow through anyway, the company arrives to sign the deal and Francine starts to approve for the money, but Steve drops a bombshell that he owns the mineral rights. 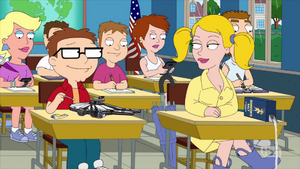 Steve takes the parties to his files where he produces a contract from Stan signing over the mineral rights eight years previously. In a flashback during one of their parties, Steve plays a treasure hunt game with Stan, during which he gives him rights to the rocks instead of a package of baseball cards that he had hidden that turn out to be valuable. Having proven his case, the salt company is ready to deal, but Steve shuts it down, determined to keep the yard in its pristine state, setting the company to getting their deal through other channels. At school, a girl flirts with Steve, until he realizes that it is the company mascot, and continues to refuse. At home, Roger tells of his own rough day and gets Steve to sign his cast. Francine brings him an alcoholic drink to get him drunk, plotting with him to poison Stan. Stan gloats that he still has his valuable baseball cards until he finds out that Roger had destroyed them in the spokes of his bike. Riding the bike, the salt people force Stan to stand up to Steve, presenting the ancient real salt girl who frightens Stan into an attempt to steal and destroy the contract, although Steve had moved the original to Snot's. But showing it off in victory, Stan tries to steal it again, but misses. 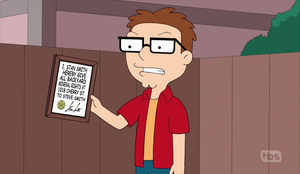 Fleeing Stan, Steve runs to Hayley, but is met with indifference because she wants to be able to protest the salt company without the stress of travel. As she puts on a show of getting out of bed to chase him, he flees to Francine and finds himself surrounded. Realizing that he is the sole holdout except for Klaus, he destroys the contract, revealing a poem treasure clue on the back that was from Jack for Stan during one of their original games, as Stan had simply reused his father's old material. Stan sides with Steve, but a crew arrives to dig, as Roger's cast that Steve signed was a new contract gaining the rights. As the digging begins, the salt turns out to be a single lump, and the crew departs as Roger reveals that it was a scam planned over three years previously for revenge against the salt company, and simply waited for Stan to clean the patio. In celebration, the family throws another backyard picnic. As Roger passes the tongs, they fall and open a fissure, which Roger first pronounces to be pepper, but then revises it to be sewage.

Previous Episode /// Mine Struggle \\\ Next Episode