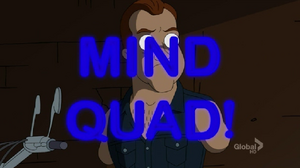 Mind Quad! is a fictitious adventure/drama television series set inside American Dad!. It stars John Q. Mind, an ex-Army officer who has garnered special powers due to his limbs being blown into his mind, as the show's main protagonist. The show is presented as an adventure/drama, similar to those seen in the 1970s.

The show revolves around freelance quadriplegic John Q. Mind, who performs good deeds throughout small, quirky American towns. In the show's second appearance in American Dad!, John encounters Jimmy Boombox, who accompanies him as his sidekick.

The series was first introduced in "In Country...Club", set shortly after John Mind's accident, causing the loss of his arms and legs, and giving him his mind powers. He is seen as a patient in the hospital where Steve is held, until he is questioned as to how he opened the curtains surrounding his bed by a doctor, who he slams into a wall using the powers of his mind. He then uses his powers to escape the hospital and flee.

At the end of the episode, a stranger claims Mind was once America's greatest soldier, until his legs were blown into his mind. The stranger then vows to find and stop Mind, who is seen still on the run, headed towards the Pentagon.

Mind Quad! reappears in "School Lies", where John Q. Mind rescues Jimmy Boombox from the police after being framed by Stan for crimes committed by Steve. John, or Johnny, as he introduces himself in this episode, uses his powers to lift Jimmy from his wheelchair and into the sidecar of his motorcycle. Before they drive off, Johnny tells Jimmy that they are headed off to perform good deeds in small, quirky towns all over America. The episode ends with Johnny and Jimmy riding off towards the horizon.

Roger awakes in the hospital following an accident in "Vision: Impossible" to find he can no longer see visions of the future. As he remarks on his lack of powers, John Q. Mind demonstrates his for him, fetching him a drink and summoning a motorcycle on which he leaves the hospital. Roger refuses to drink from the glass, as John's lack of limbs disgusted him.

During Stan's second trip to the hospital in "Trophy Wife, Trophy Life", Francine reads a magazine which notes that Mind Quad is on the loose.

Mind Quad sends the family a request for help in the mail in "Dressed Down".