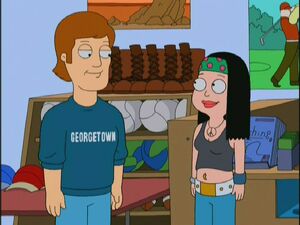 Miles is a guy Hayley meets in "Roger 'n' Me" while helping Steve pick out new speedos at Melvin's Sporting Goods. Hayley and Steve find out that Miles and Trudy Lawrence are a couple and plot to break them up, first by planting an earring on Miles at the Power Gym, then recording Trudy and manipulating the conversation to sound like she is having an affair. When they confront each other at George C. Scott Park, the plan starts to work until they tussle. Miles falls face-first into a grill while Trudy falls into a stream and is grabbed by an alligator. Hayley and Steve both decide they are no longer interested in the two.

He can also bee seen standing beside Trudy at the Chimdale Mountain Inn in "100 A.D.", passing through the Pearl Bailey High School cafeteria in "The Life Aquatic With Steve Smith", shareing a kiss at Nationals Park in "Kiss Kiss, Cam Cam" and on campus at American University in "The Devil Wears a Lapel Pin".

He appears as one of the residents of Ragi-Town in "The Enlightenment of Ragi-Baba" and can be seen in the school cafeteria in "The Witches of Langley".

Miles is voiced by Peter Facinelli.

Retrieved from "https://americandad.fandom.com/wiki/Miles?oldid=72109"
Community content is available under CC-BY-SA unless otherwise noted.