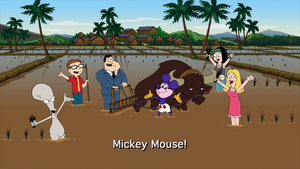 After Fung Wah, a Chinese billionaire that buys American Dad! from Seth MacFarlane sells the show to Li Quan in "American Fung", he assures the viewers that the show will be a "thousand times better," The Smith family is turned into Chinese peasants working in a rice paddy, where they discover "Mickey Mouse" who appears to lead them in song and dance to finish the show.

Retrieved from "https://americandad.fandom.com/wiki/Mickey_Mouse?oldid=64925"
Community content is available under CC-BY-SA unless otherwise noted.