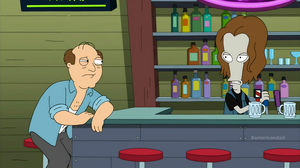 Mick is the resident barfly at Roger's Place, sometimes staying in the bar overnight and showing his "joint" to the waitresses.

When Roger suffers a heart attack in "Roger Passes the Bar", he decides to sell it to an investor named Toby who cleans it up into only a simulation of a dive bar for a more friendly appearance, and kicks the undesirables like Mick out. Roger tries to buy back his bar, but is instead talked into becoming the spokesman for the new chain, "Roger's Spot". Speaking at a seminar at The Hotel Ritchey, Roger bumps into Mick who has finally become clean and sober and is there for an AA meeting. As he speaks, Roger realizes that his heart isn't in the new venture when he tries to introduce Mick and instead sabotages the chain, succeeding in regaining control of his bar.