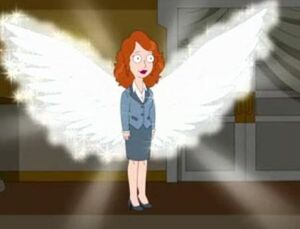 Michelle first appeared in "The Most Adequate Christmas Ever". She is introduced as Stan's lawyer in his trial to get a second chance at living, but it turns out she's lost every case she's ever had, she admitted that she lost her first ten cases because she stated that she agreed with what the prosecutor's opening statement about her client. Despite living in Heaven she does not live a very good life, her relationship with her father who happened to be the judge at Stan's trial is poor as she became a lawyer in the first place so that he would love her, and she has low salary, being unable to buy a chariot which are apparently high priced and living off of a tub of chili she stole from a potluck for a year, and God thinks she's an idiot due to an incident at a bar in which she got into an argument about abortion with him while she was drunk and tried to kiss him. After she loses the trial to give Stan a second chance Stan steals a Heaven Gun which is the only thing that a can harm an angel and takes Michelle hostage to get to Heaven and ask God for a to give him a second chance and save his family who were freezing to death at the time. After arriving at the pearly gates of Heaven Michelle and Stan try to trick St.Peter into letting them in, but when their cover was blown Michelle grabbed the gun and pointed it at Stan and when St.Peter was in front of her she hit him with the gun handle. Stan asked why she did it and she told him that she wanted to help him save his family and after arriving at Jesus' birthday the two split with Stan telling her to distract the party guests while he looks for God. After God gives Stan his second chance he asks for one more favor, and gives Michelle her wings. She's last seen flying down in front of the Smith's living room when Stan and the family hug and then a drunk Roger sees and mistakes her for a flying hooker and tells her to go before passing out and Stan and Michelle smile at each other, ending the episode. 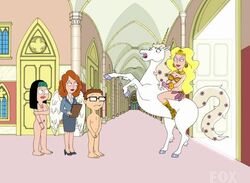 She returns in "Rapture's Delight", escorting Steve and Hayley to their own personal Heavens. When she takes Stan to his personal Heaven she explains that he can make it whatever he desires, and so he makes it so that his life with his family begins again in a restart of his life as the series continues.

After Lisa Kudrow balked at reprising her role as Michelle, Paget Brewster was given the role with a new character design.