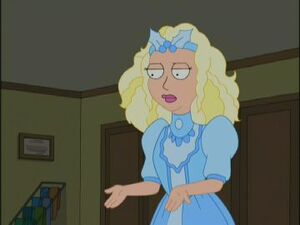 Michelle is a former tooth fairy now working as The Ghost of Christmas Past who takes Stan back in time to try and regain his spirit of Christmas in "The Best Christmas Story Never". She however loses Stan in the past and brings Francine back to the past to try and find him. It is also implied that she took a dump on the desk of her boss when she left the tooth fairy job. It is shown by "I can't go back not after I left a going away present on my supervisors desk" and "Did you know DNA was in poo? I sure didn't".

Despite her efforts to correct the past, she doesn't seem too concerned that in the new version of the present there is no Brady Bill, buying Stan a gun for Christmas on short notice.

At some point in the past, she had a relationship with 'Chad', who apparently was wealthy enough to have supported her without having to work, but she turned him down in favor of pursuing her career.