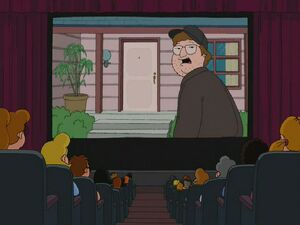 Michael Francis Moore is an American filmmaker, author and liberal political commentator. He is the director and producer of Bowling for Columbine, Fahrenheit 9/11, Sicko, and Capitalism: A Love Story, four of the top eight highest-grossing documentaries of all time. In September 2008, he released his first free movie on the Internet, Slacker Uprising, documenting his personal crusade to encourage more Americans to vote in presidential elections. He has also written and starred in the TV shows TV Nation and The Awful Truth.

In "Stan of Arabia: Part 1", Michael has sold out, making a fake documentary about health care starring Angelina Jolie.

Michael Moore appears as one of the celebrity robots in "Tearjerker".

Radical Occupy terrorists brainwash Stan Smith in a plot to use missiles to re-scupt some of Mount Rushmore's figures into those of leftist heroes including Sean Penn, Michael Moore and Captain Planet in "Honey, I'm Homeland". Thanks to Hayley's intervention, Stan breaks the brainwashing but the missiles are still launched. They are taken out by a CIA installed anti-missile laster defense the entire plot is revealed to have been a test of the system.

Moore is voiced by Mike Henry.